If your business or aggregator has an agreement with ALI group, you can activate and set up your access as follows: 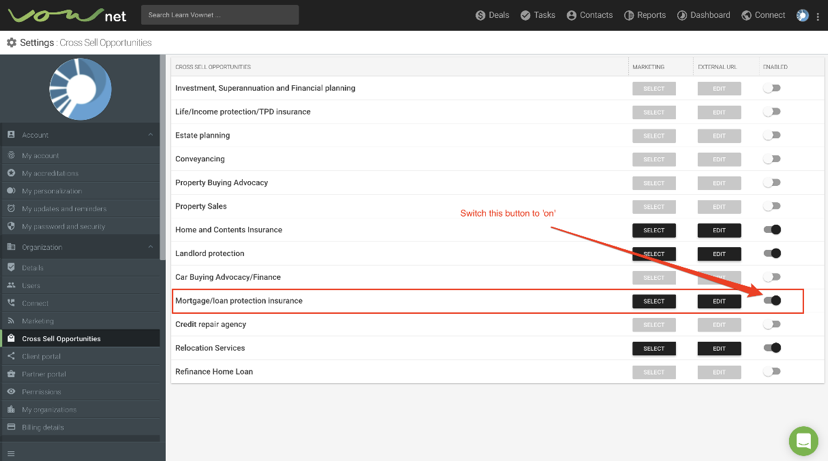 Go to Settings and add your ALI credentials. Contact your aggregator or ALI group to obtain these: 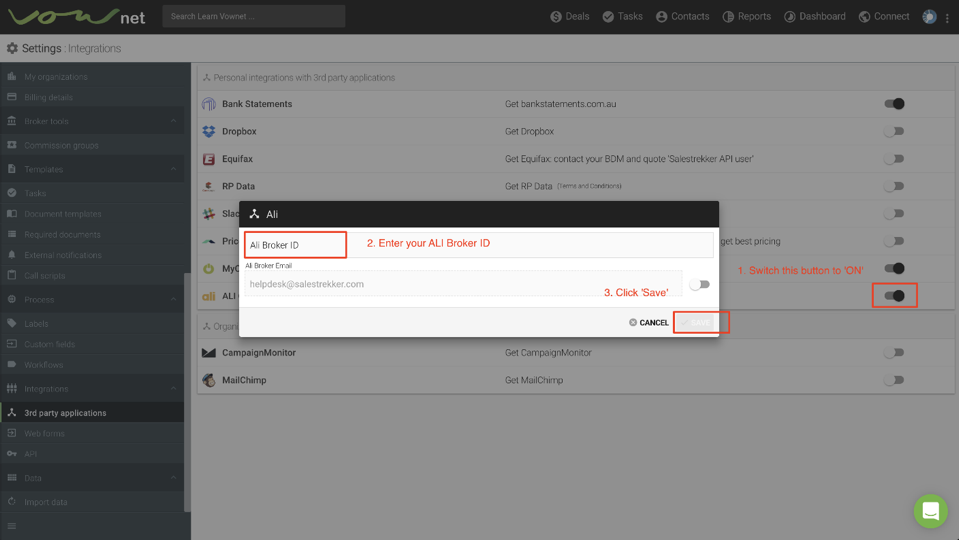 ALI Group is now enabled for you. To use ALI Group in your cross sell, go to a deal and click on 'ALI Group. button in the Cross sell section of Broker Tools: 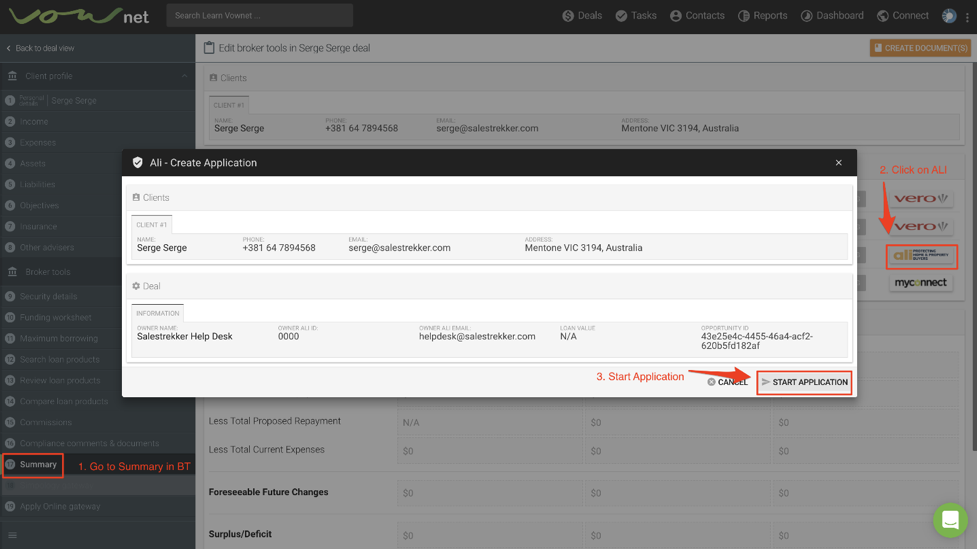 NOTE: In order to send the lead to ALI Group, you will need to have all the relevant fields entered in Broker Tools (e.g. Client DOB).

The Resi Renew/Restart Product Refresher webinars were held on the 9th of October 2018. A wealth of valuable information was shared, and we recommend you take the time to watch them.

Please click below for the relevant webinar and their corresponding assets.

From 1 November 2018, the Australian Financial Complaints Authority (AFCA) scheme will take over external dispute resolution (EDR) schemes for the financial services industry, replacing the Financial Ombudsman Service (FOS), the Credit and Investments Ombudsman (CIO) and the Superannuation Complaints Tribunal. The AFCA scheme will have an increased compensation limit of $500,000 for most non-superannuation disputes. We wish to confirm that the current Vow professional indemnity insurance policy provides coverage up to the limit of $20 million.

Other important points to note on the transition to AFCA:

Earlier this year I predicted that the property markets that have been overshowed by the recent real estate boom in Melbourne and Sydney should begin in recover during 2018.

These "Cinderella" property markets include Brisbane, Adelaide, Canberra and Perth.

I am pleased to see that this prediction is becoming reality especially in Brisbane and Perth.

Both these two capital cities have seen their rental vacancy rate drop consistently over the past several months.

Historically, the rental market is a forward indicator of the overall health of property market and these falling vacancy rates indicate that both these property markets are on the road to recovery.

Brisbane has shown the most promising signs of recovery with Brisbane rental filling up fast due to increasing demand for people moving to the city from Sydney.

The latest figures from property valuation firm SQM Research reveal rental vacancies in Brisbane fell to 2.9 per cent in July -- down from 3 per cent in June -- marking the fifth straight monthly decline this year.

Over the coming year, the demand for property in Brisbane is expected to rise as more people move from Sydney in search of more affordable housing.

The gap between Brisbane and Sydney house prices is the largest it had been in at least 15 years.

In addition, with an improving State economy in Queensland, there are greater employment opportunities for people migrating to State and this is an additional key factor that will underpin the revival in the Brisbane property market over the coming year.

In Perth, the rental vacancy rate at 4.5% is now the lowest since 2015. Overall, the number of properties listed for rent in Perth is 25% lower than the same time last year.

Canberra's property market is also on the rebound with the ACT's vacancy rate falling to the second lowest in the country, and rents only surpassed by Sydney.

Out of 72,623 properties across Canberra, there were only 687 listings.

Canberra's house rents are up 11.7 per cent over the year, the highest rise in the country.

Adelaide's vacancy rate is also in a downward trajectory with the vacancy rate in the city falling to 1.3 per cent from 1.5 per cent, and down from 1.8 per cent a year ago.

DEPPRO operates in all of the major capital cites in Australia already during the last four months we have seen an upswing in the number of tax depreciation reports we are undertaking for clients in Perth, Adelaide, Brisbane and the ACT.

These astute investors are now buying property in the expectation of capital growth moving forward and using the generous tax depreciation benefits associated with property investment to help fund their acquisitions.

Click the link below and complete the details to ensure your client receives a higher return on their cashflow.

Consumers are continuing to turn to mortgage brokers in ever-growing numbers, demonstrating their trust and confidence in the broker community, according to the latest quarterly data on market share.

New data released by research group comparator, a CoreLogic business, has shown a continuation of strong growth in market share. Brokers settled 53.9 per cent of all new residential home loans during the June 2018 quarter, compared to 51.5 per cent for the same quarter last year. The June 2018 quarter was also the strongest June quarter ever recorded in what is traditionally a seasonally-low quarter for broker market share.

Mortgage & Finance Association of Australia's (MFAA) CEO Mike Felton said the data was further evidence of the value and service that mortgage brokers deliver to customers and the economy.

"This result is a triumph for our members, whose exemplary work for their customers has risen above the current scrutiny and media attention.

"Mortgage brokers settled $49.5 billion in residential home loans in the quarter, which is the largest dollar value recorded for the broker channel for the seasonally-low June quarter since data collection commenced in 2012," Mr Felton said.

"The 2.4 percentage point increase on the same quarter in 2017 is also the biggest increase between like quarters since December 2014 and is made even more significant by the fact that the quarter coincided with the Royal Commission hearings.

"This result is a testament to the remarkable work of brokers and their commitment to quality service. According to a recent report by Deloitte Access Economics, mortgage brokers on average have 13.8 years' industry experience. This expertise underpins the trust and confidence that consumers have in their broker, and the value that expertise is delivering," he added.

Comparator compiles quarterly broker statistics for the MFAA by calculating the value of loans settled by 18 of the leading brokers and aggregators as a percentage of ABS Housing Finance commitments. The MFAA releases these statistics each quarter.

We are excited to advise of further improvements to our Resi renew/restart product range with rate cuts for new Alt Doc loans of up to 0.55%! These rate cuts apply to Prime and Near Prime Alt Doc loans and the special rates are on offer through to 30th November 2018.

To further benefit your clients, we are excited to advise that these rate cuts can be used in conjunction with the Near Prime upfront fee waiver - saving your client both Application and Legal fees for Near Prime applications lodged up until 2nd November 2018.

Combine this with the low entry cost solution for our Near Prime and Specialist lending options, it is hard to go past the Resi Renew-Restart range for your clients looking for a solution outside the square...

When to use Alt Doc?

Naturally only for self employed applicants.

The Matrix provides you with guidance on which Alt Doc solution will best suit your client needs. 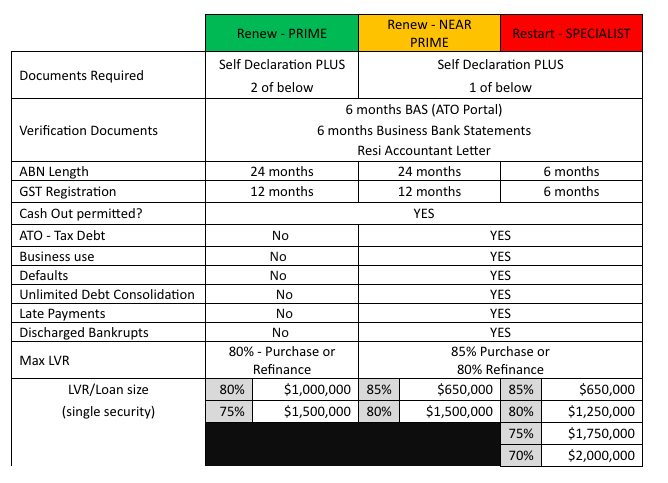 Click Here for our latest rate card for your reference, please feel free to contact the team to discuss your next scenario or if you are not quite sure where to start!